The Trident of Paracelsus

March 25, 2012
The cross or knot of "Thet" represents blood and the uterus - it is related to the worship of then Egyptian deity Isis.

Parts of the river Thames are referred to as the river Isis - maybe some torso connection there. There is an obvious reference within the book "Transcendental Magic" by Eliphas Levi, which has a Tau, three triangles and a reference to the magicians of Alexandria and thaumaturgy..It is in reference to the ceremonial tool, the trident, formulated by Paracelsus who was revered by Levi.


"The trident, symbol of the triad, is formed of three pyramidal teeth superposed on a Greek or Latin Tau.One the first teeth we see a 'jod' through a crescent on the one hand, and the other a transverse line , is reminiscent hieroglyphement the zodiac sigil of cancer.On the opposing tooth is the mixed reminiscent of Gemini and the Leo. Between the claws of the Crab (cancer) we see the Sun, we see the near the Leo and the astronomical cross.The middle tooth is traced the hieroglyphic figure of the celestial serpent, whose head the sign of Jupiter. Side of the crayfish is the word Obito, litt: goes away, backwards, and side of the lion is read IMO, litt: anyway, persite. The center and near the serpent symbolism is read AP SALT DO, word composed of an abbreviation, a cabalistically compound word , and finally a whole word and vulgar: AP,  should be read AR because these are the first two letters of the word Archée, DO, should be read OD and SEL mean 'salt'. These are the three primary substances, and the occult names of  'Archée' and 'Od', expressing the same things as 'Sulfur' and 'Mercury' of the philosophers.

"The threefold repetition of names with varied intonations were united to triangular combinations in magical ceremonies. The Magic Wand was frequently surmounted with a small magnetized fork, which Paracelsus replaced by the trident. This trident is a pantacle expressing the synthesis of the triad in the monad, thus completing the sacred tetrad. He ascribed to this figure all the virtues which kabalistic Hebrews attribute to the name of Jehovah and the thaumaturgic properties of the ABRACADABRA, used by the hierophants of Alexandria". 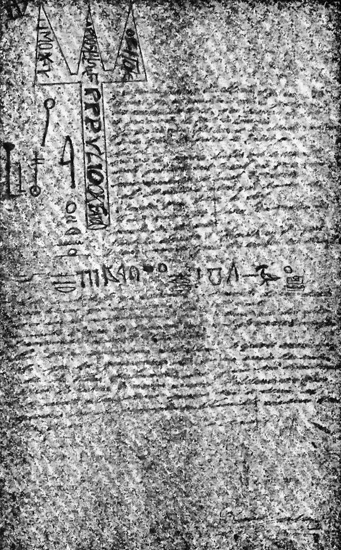 The metal teeth (iron, tin or steel), a cylindrical handle, ebony wood for insulation. Analyze the markings on the teeth, the signs inscribed near the base of teeth, and a golden mark on the handle.Obito (obey, yield to be obedient and guard) this 'word' describes the scope of the passive manifestations of human life in the physical plane (or rather - in the three planes of the physical embodiment).Imo, which means, on the contrary, in defiance, in the sense of - resist, proved active. Apdosel, Greek 'αρ' for ρλη (bow)

The handle is decorated with gold letters:

On the iron rod to be used in fitting (fixing) the trident we see three times the letter PPP:Phalloides hieroglyph and the Ingamique; then the words VLI DOX FATO, which must be read by taking the first letter for the number of pentragramme in Roman numerals,thus completing PENTAGRAMMATICA LIBERTATE DOXA FATO: Freedom, Power, Duty. On the one hand, absolute freedom, on the other, the necessity or inevitability invicilbe, in the middle: the Reason, which is the absolute cabalistic universal balance.

Triple P: for fertilization in the three planes;V Latin-figure 5, an indication of the pentagram is a symbol of the will of man;
LI = first letters of the Latin word: Libertate (freedom);
VLI = pentagrammatica libertate = Free Will;
DOX means doxa (awareness), ie, that gives us consciousness;
FATO means fate, karma.

Note: (Tau Cross -  Symbol of the god Mathras of the Persians and the  Aryans of India. To them, Mathras was an "angel of light" or the "heavenly  light". It is used in modern Masonry under the symbol of the T square.)


"One of his more interesting magical medical devices was a curious trident, which Paracelsus, himself, designed as a cure for impotence and diseases of the genitals supposedly brought on by witchcraft.Paaracelsus saisd that the trident should be made from an old horseshoe and engraved with various magical symbols. On the day of Venus and in the hour of Saturn, the magical therapeutic trident had to be concealed in the bed of a running brook.The victim would then be healed, and the infliction would bounce back and infect the witch or wizard who had performed the spell that had made the original victim ill. Eliphas Levi (1810-1875), widely regarded as an authority on ritual magic, had other interpretations of the famous Paracelsian trident.He suggested that it actually represented the Holy Trinity and the three major alchemical elements:salt, sulphur, and mercury".. 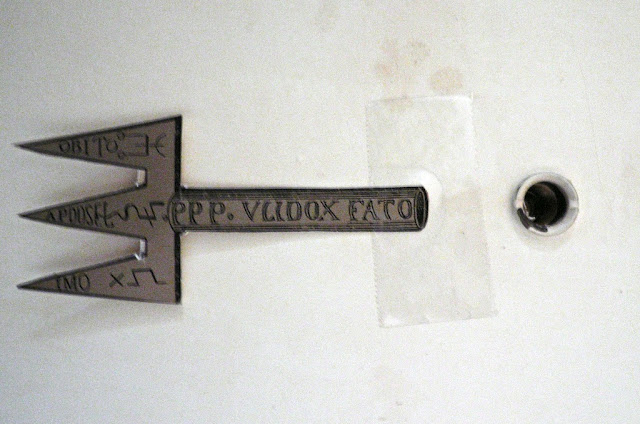 "The instructions for constructing the famous ‘Trident of the Magic Arte’, which in this text is actually a silver lamen used in conjuction with operations to cure the generative organs"..

"The Trident of Paracelsus seems to be a magickal weapon that harmonises instead of blasts, the weapon symbolically represents Man's authority to "create" and "destroy" in the universe by unifying "passive" and "active" energies into a unified whole, either active (alive) or passive (neutralised). This seems to be effective against Lavae (and probably all spirits negative and positive) because they are not balanced - only by incarnating does Man have the opportunity to become balanced. I suspect this is why Eliphas Levi regarded this as such an important magickal weapon, it allows the magickian to harmonise and balance his own soul as well as impose his will on the physical universe, the tool can be used symbolically in a meditative manner and as an initiation tool or physically". That's an interesting point of view.. 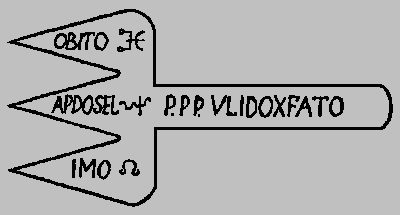 "This was once a central tool of Western magicians, and instructions for making and consecrating it can still be found in some older sources. Unlike themore common magical working tools used in most tradition nowadays, it doesn't require a great deal of experience in ritual technique to prepare and use, and this makes it particularly useful for the monster investigator with a limited magical background.The blade of the trident is made of sheet iron or steel -- 12 to 16 gauge usually works well - cut out with a hacksaw in the pattern shown below; the dimension can vary, but a lenght of around one foot and a width around six to eight inches works well.The hilt is a piece of one-inch diameter wooden dowel, one to two feet long, with a slit cut in one end to receive the blade. Both the blade and the hilt should be painted with sanded smooth, and should be painted with a good enamel paint for the sake of etheric insulation. Hilt and blade can be joined with a strong all-purpose glue, or a pilot hole can punched in the end of the blade that joins the hilt,and a metal screw used to make the connection secure.The three points of the trident should be sharpened with a file, and kept sharp for use; the blade should be lightly treated with a preservative oil or wax to prevent rust"..

"In use, the trident is wielded like a sword.The three points form the business end, and they may be used either to thrust or to slash. The trident may also simply be used to bar a monster's way; few monstrous beings will risk confronting cold iron backed with a magical consecration.Some entities may try to bluff or trick their way past the trident, of course, and this should be kept in mind when using it"..